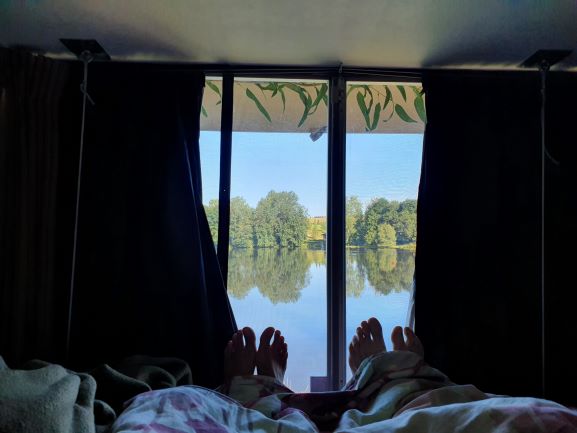 Episode 7 of our European Overland trip 2020

For those who prefer the vlog, it’s at the bottom 😉

Which already begins at the border. So after being able to avoid getting a tolbox the past years (expensive, administrative hassle, who needs one anyway when you don’t drive tolroads… ) we decided – after some friendly advice – to finally get one. But then, where? We tried to get one at the border, but after checking various locations, we were directed to a bigger town closer to Prague and where the tolroads began. So it remained on our to do list. First, exploring the south west part of the Chech Republic. The Chech language is not familiar to anything we know, apart from Polish, but then we are not very fluent in that language as well. All the villages seem to be named after places from The Lords of the Rings and the landscape is amazing too, especially Adršpach Rocks (pronounced Adršpašské skály – there you go…), which we will visit in the next episode.

We ended up on a nice campsite, not too big (you will find many big, if not, huge campsites in this area) and straight on the borders of lake Lipno. Your typical Chech fishermen (don’t disturb the fish) campsite but friendly and with beautiful views. And what a view to wake up to!

Lake Lipno is a reservoir of about 40 km long and has started to become a real tourist hot spot. There are very good cycling paths along the lake, but then it seems as if very Chech has a bike!

You can obviously do the whole lake, but you can also take a short cut with one of the ferries. But, it’s not easy to get on as you will see in the video. In the end we made it back…

Something that needed immediate attention was the drawing on the truck. I had copied it through the help of a beamer, but apparantly one of the markers wasn’t as permanent as promised by the manufacturer… it started to fade in a very serious way! So time to get the brushed out and start painting.

Our next stop is Český Krumlov on the river Moldau, a beautiful historical city and castle worth visiting. Normally it is a place overrun by tourists and in corona-times we did wanted to be sure to stay save. But as you see in the pictures, the streets are almost empty. And the same goes for Prague, which we visited next. The evening ended in a water ballet, we were soaked to our skin making it back to the camper.

In Prague we camped on the Moldau, a campsite to park when you are in Prague as you can easily take the little ferry across and enjoy the cruise while you’re on. We were met by Vlasti and Radek, two hangglider pilots who showed us their beautiful town. And again, almost empty streets, except for the famous Carlsbridge. I just had to wait a couple of seconds to get the amazing facades without anyone on.

After all this amazing sightseeing, it’s time to get back in the air, hopefully. Is my shoulder recovered enough for a nice flight from one of the best flying sites in the Chech Republic? Stay tuned for the next episode to find out. Here’s the vlog of our Bohemian Adventure.